New Zealand gets its money’s worth.

Remember the fog of ignorance – the uncertainties in global weather reconstructions that our new observations will help to clear away? Here’s another view of the problem (click on the image to see the movie version). 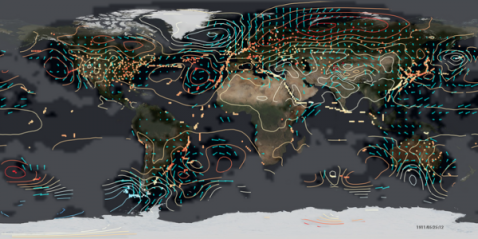 A global weather reconstruction for midnight, May 25th, 1911. Coloured dots are surface pressure observations (blue - low pressure (storms), red - high pressure (fine weather)), the coloured lines and arrows show the sea-level pressure and 10m winds reconstructed by the twentieth century reanalysis. Areas fogged-out mark regions where reconstruction is impossible because there are no observations (yet - the OldWeather observations are not yet included in this analysis).

The skill with which we can reconstruct past weather depends critically on how many observations of it we have, and for the period we’re investigating in Oldweather, it varies a lot from place to place: in the UK and US we can do reconstructions precisely, but for much of the rest of the world – the southern hemisphere in particular – we’re still very uncertain.

So how much improvement do we expect when we add our new observations to these reconstructions? Obviously this depends on where the new observations were made, and on how good they were, so it’s interesting to compare a few, from a range of times and places. I chose to follow the battlecruiser HMS New Zealand on her circumnavigation in 1919: comparing, at every point in the voyage, her observations of the weather (air pressure) with the existing reconstruction – our best estimate of the weather before Oldweather. 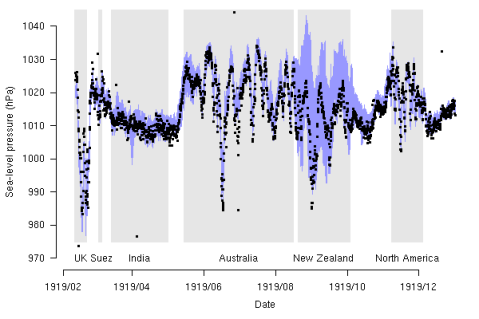 The New Zealand started her trip in Plymouth in February, where we already knew that the weather was miserable – the thinness of the blue line means that we already had enough nearby observations to be sure of the weather, and the spikes in the pressure series are depressions blowing through. The good news is that the ship’s observations agree almost exactly with the reconstructions using other records, which means that the New Zealand was making good observations – they’d calibrated the barometer correctly and were careful in their measurements.

Almost as soon as the ship leaves the UK, the blue line widens – our reconstructions are less certain of the weather. it also gets less variable, as they are sailing in the more stable weather of the tropics. The best illustration of the value of the new data, however, comes in the southern hemisphere: for Australia we already have some observations, so our reconstruction was fairly well constrained already, but New Zealand (the country) was deep in the fog of ignorance, and the wide blue band at that point shows the huge uncertainty in the local weather – an uncertainty that we’re now able to remove using the new observations from New Zealand (the ship).

It will be a while before we can make another global weather reconstruction that includes our new Oldweather observations (that’s a major project taking lots of supercomputer time), but plans for doing it are well advanced. When we’ve done this, and I’m able to repeat this analysis using the resulting reconstruction, then the weather will be precisely known all along the route of the ship (the blue band will be thin at all points) and New Zealand (the country) will have emerged from the fog of ignorance – it’s weather conditions will be clearly known.

Which is only fair, as the New Zealanders paid for the construction of the eponymous battlecruiser in the first place.

8 responses to “New Zealand gets its money’s worth.”

This is the blog for the Zooniverse's Old Weather project. Visit the main site at oldweather.org or find out more about the Zooniverse at zooniverse.org.